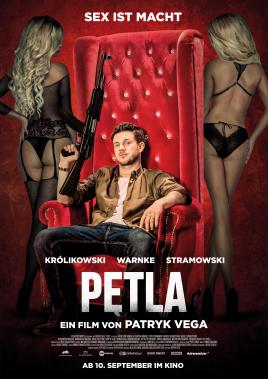 A seeming coincidence makes the paths of a police officer Daniel (Antoni Królikowski) and two twin brothers from Ukraine cross.
Thanks to the information acquired from Zenia and Alex and their contacts with the local underworld, the young policeman is quickly promoted and becomes an officer of the Central Anticorruption Bureau. Soon, under the guise of the police operation, he takes over a well-known brothel, and starts to eliminate his competition, the pimps in Subcarpathia.
Over time, having gained increasing influence, and taking a perverse game with the gangsters and his superiors at work, he creates an exclusive place, where one can make sex with high-class prostitutes in complete discretion guaranteed. In reality, however, in all the rooms, hidden cameras are installed. Daniel and the twins collect the compromising materials on the guests – the prominent politicians, clergymen and show-business representatives – in order to blackmail them.
Yet, a moment of distraction is enough to turn the hunter, the Central Anticorruption Bureau officer, into the hunted. Now, he is wanted by both, the Polish Secret Service and the Russian intelligence.